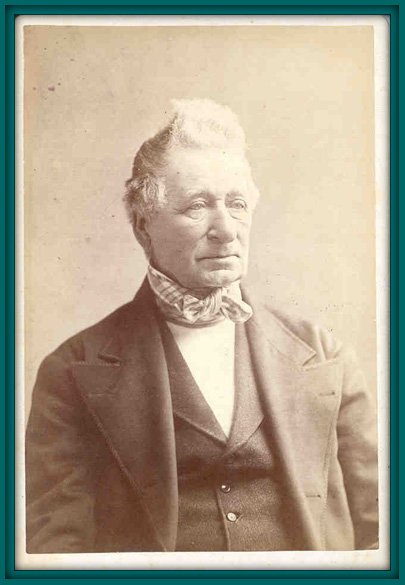 Here is a photo of John Fletcher Wonson (1802 - 1867), founder of John F. Wonson & Company of East Gloucester. Besides founding the company that bore his name, he was chiefly famous as the fisherman who established the winter halibut fishery on Georges Bank.

Prior to 1830, common wisdom held that any vessel that anchored on Georges in winter--when wicked tides race over the shoal--was in danger of exceeding hull speed and being "drored under".  In March 1830, John Fletcher Wonson anchored the family schooner Nautilus on Georges and fished up 20 enormous halibut, which he brought into Gloucester. Thereafter, winter halibut became a staple of the new fresh fish business, supplementing the ancient salt cod business.

John began fishing with his father, Samuel Wonson (1773 - 1850). Samuel was a principal in Giles & Wonson and later Samuel Wonson & Sons.  About 1832, when Samuel retired from the sea to become the first keeper of the Eastern Point lighthouse, John  had a parting of the ways with his older brother, also named Samuel, and set up in business for himself. The heyday of John F. Wonson & Company was after John's death, under the entrepreneurship of three of John's sons: Frederick Giles Wonson (1829 -1919), Roger Williams Wonson (1834 -1920), and Franklin Augustus Wonson (1846 -1903).  In 1894, when the company had the Effie M. Morrissey built, she was one of seventeen schooners sailing under the John F. Wonson flag.  In 1905, following the death of Franklin Augustus Wonson, the company sold off its vessels and dockside assets and became mainly a fish specialty marketing operation under the direction of Frederick Giles Wonson's son, "Charlie Fred"  (1859 -1936).